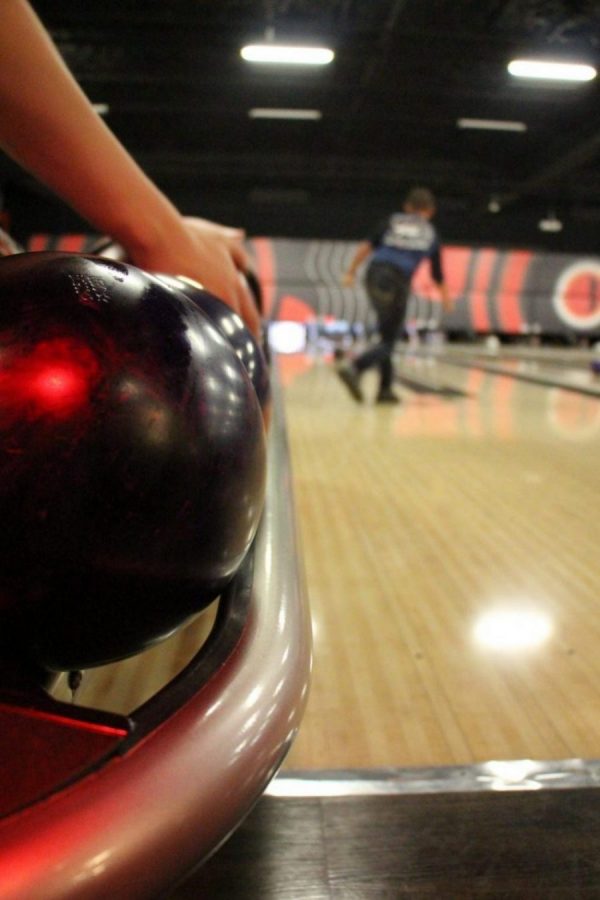 Bowling balls lined up at the bowling alley

“If you pick up your bowling ball and you’re on the approach and you don’t know what you’re doing you’re in trouble,” sophomore Spencer Robarge said.

Robarge is a bowler on the varsity bowling team. He’s been bowling for twelve years.

“I spent so much time in the bowling center that it became second nature for me to be there for twelve-fourteen hours a day,” Robarge said.

His mom started him bowling at a young age. While his dad would have preferred he play a different sport, he received endless support from his mom, brother, and grandma.

“They’ve supported me taking me to tournaments all the time and watching me bowl,” Robarge said.

He started bowling when he was four and soon after he was bowling competitively.

“It was a lot of fun being really young and bowling, you didn’t really understand what was on only that you try to hit the most pins,” Robarge said.

Over the years his love for the sport grew along with his knowledge and skill.

For him, bowling was the only sport he’s ever played.

“I wasn’t fast enough to play basketball I wasn’t big enough to play football I didn’t have enough stamina for something like baseball I was really good at bowling,” Robarge said.

“Nobody really understood what it was and as they got older, second or third grade, I got a lot of ridicule for it,” Robarge said.

Another place he’s been able to find support is with his teammates on the lanes.

“I’ve been on the team with him since a sophomore year but I’ve known him since freshman year,” junior Graham Mortimore said.

“I remember first watching him and just being in shock about how good he was,” Mortimore said.

Mortimore not only sees Robarge as a great bowler but also as an uplifting teammate.

“He always takes the lead and gets up hyped up and gives us tips on how to improve,” he added.

Growing up playing a nontraditional sport Robarge has been met with a few misconceptions.

“Bowling is a sport you can do for the rest of your life. Go to Andy B’s on any afternoon and you’ll see older people that have been playing for years,” Robarge said.

He combats nervousness with calm confidence in his abilities. His goal going in is always to win.

“In my eyes, my job is to win the tournament, to make sure this kid who thinks he will win doesn’t,” Robarge said.

He ensures his confidence in his playing through hard work and practice. Robarge spends anywhere from one to twelve hours a day bowling. Either working in the pro shop or bowling, his life is spent in the bowling center.

“I really don’t like mediocrity if I can win, put the time in I’ve spent the last 60% of my life bowling, I’ve worked for where I’m at and my job is to work to stay where I’m at,” Robarge said.

He also spends a lot of time studying.

“It’s almost like school, you may be at school for seven hours but you’re doing school work for more than seven hours a day,” Robarge said.

One way he stays calm during games is with a hard working and humble mentality.

Robarge has had above average scores in tournaments in the last few years with the highest possible score being 300.

He has scored 21 official 300 point games and is close to beating the youth bowling record with only ten more to go in the next four years.

One of his main career goals is to work with storm bowling. Storm bowling is a leading bowling ball and bowling equipment manufacturer.

“They’ve known me pretty well the last couple of years I have my foot in the door, they would allow me to go on tour which is my main goal,” Robarge said.

Robarge has appeared in advertisements for this company within the last two years.

“I want to work for them and hopefully make their company better than it is. With an already great company it’s a tough task ahead,” Robarge said.

He is also interested in owning a bowling center when he’s older.

“I’ve been around it my whole life and I feel like I could really run a center successfully,” Robarge said.

“A lot of people only do one or the other and don’t do both and I think that’s where the gap is at,” Robarge said.

Before he works in the bowling industry Robarge wants to go to college. He wants to attend a college with a good bowling team as well as a business program to help him later on. Through his bowling, he could receive either partial scholarships or even a full ride as some schools have already offered.

“If I keep on I should be able to get a full ride because I’m not only a good bowler but also a good student. I will have academics as well as athletics,” Robarge said.

Robarge would also urge people who want to try bowling to come out and try it.

Throughout his athletic career, Robarge has paid for bowling through fundraising through different companies. In the next few months, he plans to start fixing up and reselling used bowling balls from his own home.

“I would definitely encourage younger kids to come out and try it and see if you like it,” Robarge said.

Bowling has had an impact on his life and he wants to encourage others to play.

“A wonderful thing about it is all the great people I’ve met,” he said.

He is thankful for other athletes he’s helped throughout the years and hopes to spread a love for the sport.

“I just want others to fall in love with the sport and hopefully grow the sport as a whole,” Robarge said.