Cheering For The Squad 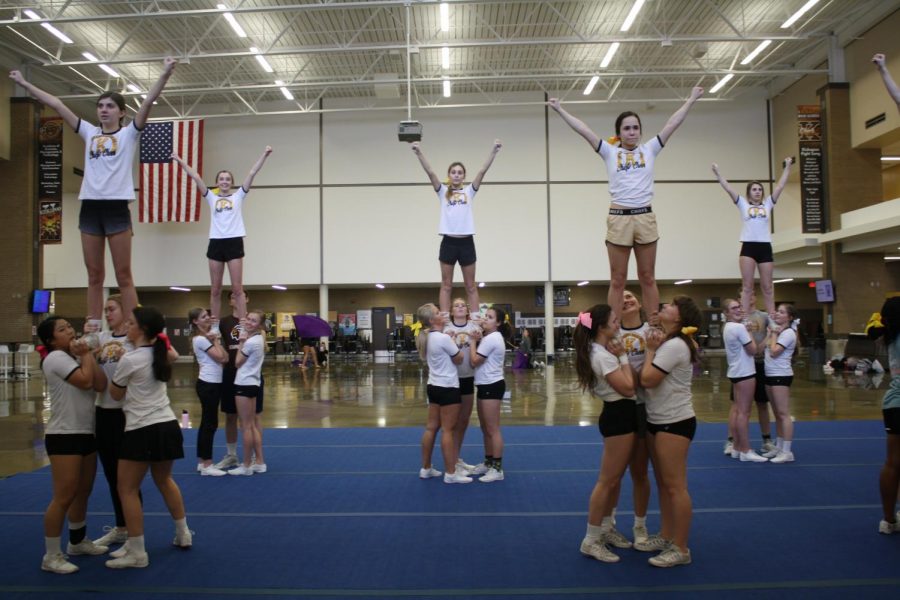 The cheer team practices a stunt commonly done at tryouts.

Cheer tryout applications are available in the main office but just signing a paper isn’t all that goes into the cheer applications. Cheer tryout forms are due March 11th and tryouts are on March 23rd through the 26th for Freshman through Juniors.  Tryouts consist of four consecutive days where each day is a new challenge.

On day one of tryouts, they go over a mixture of different types of stunts.

“On the first day they learn a cheer a chant and a dance and then we go over motions jumps tumbling things like that, Cheer coach Audrey Larson said.

On the second day of tryouts, they demonstrate there jumping ability.

“They show us their jumps and there graded on there technique of there jumps and they demonstrate the level of tumbling they have so the harder the skill the more points you get, Coach Larson said.

The final two days they wrap the tryouts up with group stunts.

“Wednesday and Thursday they do group stunts and that’s when they practice learning the lifts, Coach Larson said.

Cheer does not need a set number of people to form a cheer team. It is based on a point system. They don’t always look for the skill they also look for personality.

“We really look for the potential we look for really good attitudes and if your willing to work you don’t have to be the best of the best you just have to want to be,” Coach Larson said.