KHS Winterguard athletes prepare for a new season with new regulations and a new mindset. 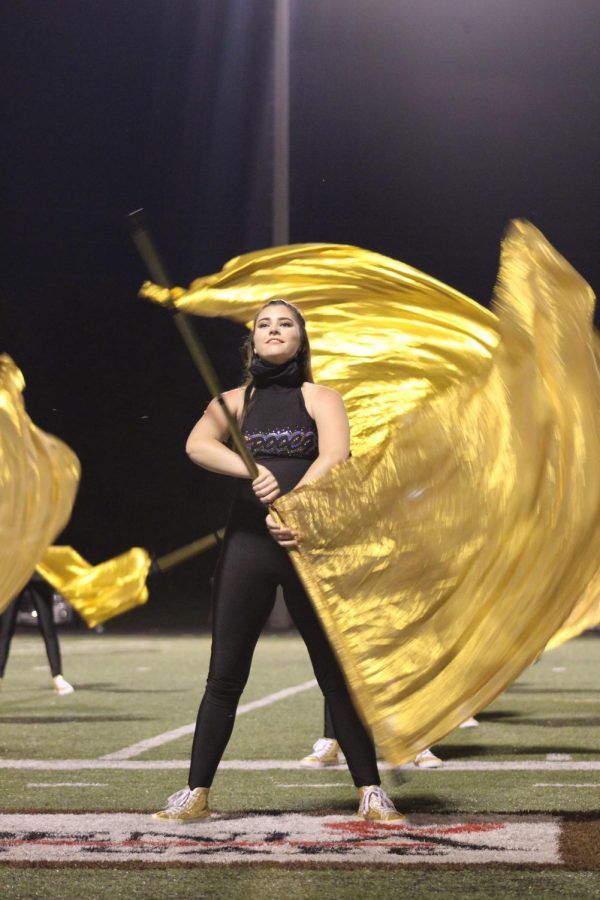 Kickapoo’s Winterguard season will look unconventional this year due to COVID-19 the recent spike of cases nationwide.

Winterguard is a choreographed performance art in which performers use rifles, sabers, and flags as props. Within this discipline, precision and energy are vital to emotionally impactful performances.

This season, however, cohort separation between students has been challenging. Because some rehearsals take place during school hours, not all members can be present for all practices.

Additionally, their typical style of choreography has required alterations, and their usual outside consultants are unable to support the group this year. The combination of obstacles has altered the overall experience for performers.

“With the equipment work we do, we are used to being farther apart so social distancing hasn’t been too difficult for us”, comments Colorguard sponsor and KHS Social Studies teacher Sherri Peterson.

Winter Guard senior Benjamin Ralston speaks about the impacts of the new barriers.

”It is hard to enjoy something as much as you normally do when you can’t do it to the full extent it’s intended”, Ralston says.

More than that, he comments that the synergy of the group has been affected. Synergy is the combined efforts of the members amplifying together to produce a greater, collective work. This group result can be better (or worse) than the performance of the individuals.

Simply, positive synergy is irreplaceable in Colorguard. And because of the limitations in place, the team dynamic has been altered.

However, according to Peterson, these changes are pushing the students to maintain their momentum now more than ever.

“I think they are excited to be able to do what they love doing, performing – even though it has been different”, Peterson says.

And despite many obstacles, they will be able to do just that.

“Both of the winter guard circuits that we compete in have chosen to offer virtual competition seasons”, Peterson says.

These circuits have been giving their teams the option of whether to register for competitive or non-competitive performances.

Practically speaking, this means that the KHS Winter Guard will submit a video performance and will receive scores and feedback.

“They have been very motivated to excel at the performance opportunities we have had so far this year”, says Peterson.

The team picks a theme each season; this season’s theme is centralized around thinking. Inspired by a famous bronze sculpture titled The Thinker and crafted by Auguste Rodin, the show will focus on the mind. According to Peterson, the performance will juxtapose classical elements with a modern twist.

Peterson says, “We are going to use bright, vibrant colors and a collection of different types of musical genres.”

The purpose of the show is to convey to audiences the power of thinking. This year, that power has been shown. With quarantine and societal unrest came a spiral of unhealthy thought patterns for many individuals. Mental health suffered. But creativity flourished. Books were written and art was inspired based on our shared struggles. The performance highlights thought as the art form of the mind. It also inadvertently speaks to the power of thought during these trying times.

Worldwide, people have relearned the value of each moment this year. Because many sports and fine arts groups have experienced problems with meeting regularly, this has made every moment count.

Peterson says, “We’ve just tried to appreciate the opportunities we get to have together as a team – have fun…and always focus on enjoying the memories we are making”.

In the end, the focus placed on the hardships we experience is either positive or negative.

“We often talk about challenges and obstacles as we prepare for performances…[placing] a focus on being positive-minded, mentally tough, and confident in your preparation.”

The Winter Guard season this year is unconventional. However, these performers have adapted to the best of their abilities and have continued working hard despite numerous obstacles.

Peterson says of her students, “They have done a great job, been positive-minded, and acclimated to changes or other obstacles extremely well”.