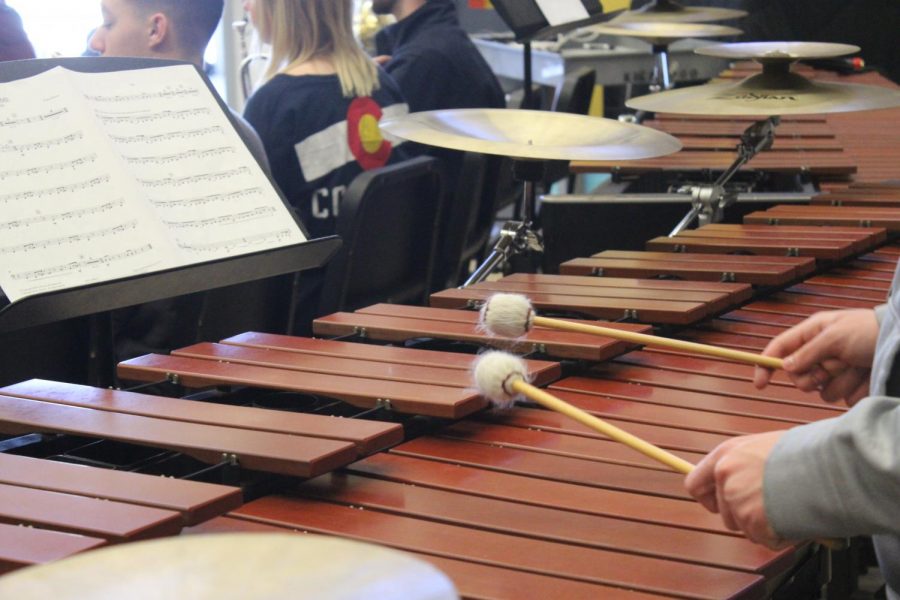 A student in band plays the Marimba.

Drumline: one of the most underrated and mentally tasking sports at school.  The season goes from November to April but competition season doesn’t start until February. Their most recent competition was Saturday at Nixa high school.   The main, intense practices are from November through January but practice never stops even during competition season. Rehearsals are every Tuesday, Thursday, and sometimes on Friday. Practice can go from five to nine or six to nine. At the LPA assembly on February 21st, it was mentioned that drumline was ranked 4th in the United States but this changes constantly due to competitions always happening around the world. Big groups from California and Flordia compete which can knock drumline down a rank. Chase Sullins a member of drumline has been apart of drumline for 5 seasons. This includes Marching band and Winter drumline season each year. Judging in the percussion world is very intense. Last year drumline made prelims and semifinals. “Everything is seen from your feet and the way you play the music. They see super small things and add every decimal point it’s very very hard to make finals,” junior Chase Sullins said. Drumline works very hard on what they do and their schedules can be hectic. It takes a lot of time and energy. “It is a lot of time. It’s a huge time commitment and it cost a lot of money be prepared for the time dedication and money. It’s very hard for me on my schedule. I’m pretty much never home. That’s how it is for all of us,” Sullins said. Although it is a lot of work and a huge commitment, there are the experiences and the adrenaline of being on the floor doing what drumline knows best giving all they can when they hit the competition floor. “My favorite part is probably just my experiences. The experiences are really good like going to competitions and stuff. I’ve had a lot of troubles and a lot of good. It gives you a lot of discipline. The intense drumming is kind of like the military it’s like doing military drills it’s tough,” Sullins said.  Drumline doesn’t get the attention they desire at school. Few people go to their competitions other than band kids. Drumline’s hard work seems to be overlooked when compared to other sports. “I would really like to have more kids come out and support drumline. We usually don’t see a lot of kids other than band kids, we usually just see parents. It would be very inspiring to see more kids out there. There’s always a lot of support for football but not for drumline. That would make us really happy,” Sullins said.