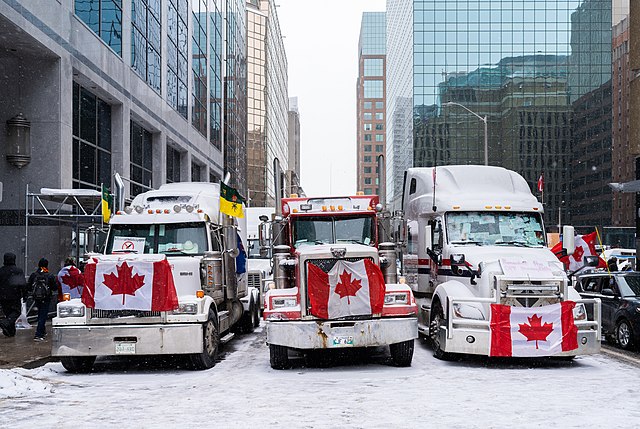 The truckers have had enough. Tens of thousands Canadian and American truck drivers gathered in western Canada. From there they embarked on a cross country journey to the nation’s capital, Ottawa.

“By the time the convoy arrived in Ottawa, hundreds of drivers and their rigs joined thousands f other protesters in cars and on foot to demand changes to the way the government was handling Covid-19,” CNN reported.

The truckers and their supporters began by protesting the COVID-19 vaccine requirements for North American truckers to cross into Canada, and then began calling for an end to federal COVID-19 restrictions, including school mask mandates.

Though their motive is COVID-based, many truckers have another goal in mind: unity. The protests certainly did exemplify this, as people from all walks of life flocked to the capital to support the truckers.

“It’s been wonderful to see all of the smiling faces coming together,” Canadian trucker Sheldon Andreas told Tucker Carlson of Fox News. “It doesn’t matter, Christians, non-Christians, the natives are out banging their drums, it’s a wonderful sensation to see unity once again in Canada.”

Though these protests have been peaceful across the capital and the rest of the country, it certainly caused some disruption.

“Blockades were also formed on the Ambassador Bridge on the Canadian border with Detroit — a crucial trade corridor between Canada and the U.S. — as well as other border crossings near Montana, North Dakota and Minnesota,” CNBC reported. The bridge was reopened a week later.

These blockades, traffic jams, and foot protests in the capital lead the Prime Minister of Canada Justin Trudeau to take action. Trudeau called for a public state of emergency, which would give him the freedom to take more extreme measures to end the protests.

“We cannot and will not allow illegal and dangerous activities to continue,” Trudeau told the country.

These emergency orders extend the power of the government as well as the police to quell protests that they consider “unlawful,” according to the New York Times.

“The police will now be able to seize trucks and other vehicles used in blockades,” the newspaper reported. “The measure will formally ban demonstrations that “go beyond lawful protest,” he said, and the government will formally ban blockades in designated areas like border crossings, airports and the city of Ottawa.”

Trudeau and the police are also taking monetary actions. They froze the bank accounts of truckers, protesters, and people who donated to their cause. This action has angered people across Canada, as well as the United States.

“Among those targeted was a single mom on a minimum wage job who donated just $50, according to one local Conservative MP, sparking outrage over what critics of Trudeau claimed was authoritarian behavior,” the Daily Mail reported.

Trudeau and his government have experienced more backlash besides the frozen bank accounts. Videos surfaced of peaceful protesters being attacked by capital police with rubber bullets and pepper spray, mounted police horses trampled others, and truckers’ gas was taken to freeze them out of their trucks.

“Something i don’t know”

These measures were not seen as necessary or okay by much of North America. Many went as far as to call Trudeau an authoritarian.

“It was one thing for the government to end the unlawful blockade of the Ambassador Bridge connecting Detroit and Windsor, Ontario — something Trudeau was able to do without invoking an emergency law. But it is quite another for the prime minister to use those emergency powers to stifle the free-speech rights of peaceful protesters gathered in front of their country’s elected Parliament,” Washington Post columnist Marc Thiessen said.

After three weeks, Trudeau and the police force ended the protests by arresting over 150 protesters who remained after being told to go home. It is unclear at this time if Trudeau is planning on letting up on his COVID-19 restrictions, or if he’s going to hold strong to his vaccines.