Corporate feminists aren’t as progressive as you think. 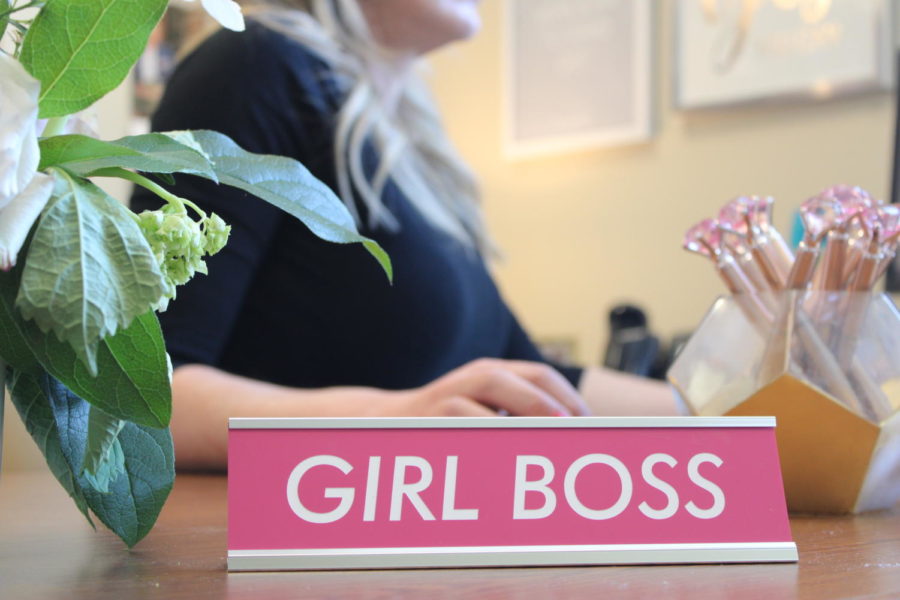 A CEO decorates her office space with a “Girlboss” desk sign.

Female empowerment has a new look, and she is a pantsuit wearing CEO.
The term “girlboss”, originally coined in Sophia Amoruso’s memoir “#Girlboss”, was originally used as a term to describe a fiercely tenacious woman whose anthem was achievement. Through her irrevocable drive, she is able to stand alongside men at the top of the patriarchal ladder.
However, this extremely individualistic approach to combating misogyny is actively harmful to the woman that the phrase “girlboss” is supposed to inspire.
The girlboss approach to feminism is problematic because of its shallow and dismissive view towards women’s issues.
Through cleverly placed advertisements convincing you to buy your feminism in the form of #Girlboss mugs and tee shirts, companies often cause an internalized idea that being a savvy businesswoman is the true sign of success in society as a feminist. The idea that money equals empowerment is presented as a way to combat the patriarchy and shatter glass ceilings, but instead actively contributes to the problems it is supposed to solve.

The girlboss archetype promotes the idea that sexism is an individual problem that can be overcome by personal achievement. So, if experiencing misogyny is believed to be an effect of laziness and a lack of hard work, then companies are able to focus on profiting off of being a “progressive” company instead of actually addressing feminist issues within it.
The woman who popularized the girlboss archetype is a prime example of a self-proclaimed “feminist” CEO who purposely turned a blind eye to unjust conditions in her company in order to increase her profit margin.
Along with multiple allegations of discrimination and claims from employees of a toxic work environment, her company Nasty Gal was built from fast-fashion. This industry notoriously exploits the labor of its female workers, specifically women of color. According to a 2020 article in The Guardian, 80% of garment workers worldwide are non-white. They are frequently subjected to verbal, physical, and sexual abuse, and are forced to work in extremely poor and unsafe conditions. Clearly Sophia Amoruso is a far cry from a feminist icon.
Girlboss CEOs view feminism as a malleable ideology, a definition that can be altered or changed based on what offers the most financial gain.
Performing as a feminist when you are anything but is not progressive. Rather, it is just women overtaking the status of men in society, actively hurting marginalized people rather than fighting against the system to empower them. An ignorant female boss is hardly different than an ignorant male one.
It is important to recognize that while girlboss CEOs equate profit with progressiveness, we do still need more female leaders.

The problem of the girlboss stems from a lack of women in leadership positions, and the blockades in place that prevent them from doing so. According to a 2021 research article in Yale Insights, women are statistically not as likely to be promoted or hold leadership positions as men are, causing women to make less by default. It is estimated that 70% of the gender pay gap is due to this corporate inequity.
Forcing women to jump over these hurdles to even reach the metaphorical starting point that men are placed at is extremely tone-deaf. Instead of encouraging women to “girlboss” their way to success, change the parameters so that they don’t have to.
We need to first, as a society, become aware that achievement is not synonymous with being a feminist. This narrative only feeds the corporate girlboss fire. By recognizing that all jobs, regardless of annual income or tax bracket, have value is vital to ending the girlboss stereotype. The idea that you are not a feminist if you don’t constantly achieve cannot coexist in a society where you are just as valuable if you make $12 an hour or $1,200 an hour.
Realizing that all labor has value will not end corporate feminism on its own. The next step to breaking down sexist barriers is education. Understanding the power dynamic and the disadvantages women face in the workplace is the key to being able to dismantle them, because then you are more likely to recognize and speak up about sexist behaviors when they happen.
While the individual approach may help on a small, temporary scale, I have already elaborated on why individual solutions to systemic problems are not sustainable. Although there is hardly a simple or easy solution to an issue such as sexism, there are steps that people can take on a societal scale to combat misogyny, and it involves using your voice.

In the age of social media, amplifying opinions or news is easier than ever before. Use this technology to your advantage to call out companies and CEOs for performative activism because in a society that revolves around money, taking it away is the greatest motivator.
Companies that use feminism as a primary marketing strategy rely on that progressive reputation to bring in profit from consumers. Calling those companies out damages that fragile reputation, and will most likely cause a massive loss of profit. This forces them to incorporate actual solutions to issues that women face in the workplace if they want to stay in business.
Although the intentions behind the term “girlboss” may not have been malicious, the resulting butterfly effect caused by it was extremely destructive. All genders are entitled to an equitable work environment. By finally ending the girlboss stereotype, society is one step closer to achieving this feat. So, throw away your girlboss merch. You don’t need it to stand for equality.