The NFL draft is approaching fast and will begin on April 25th. And with the first pick in the NFL draft I have the Arizona Cardinals selecting.

Quinnen Williams Defensive tackle out of Alabama. The 303 pound defensive tackle is impressively athletic which is why I put him as the first overall pick. At the recent NFL Combine Williams ran a 4.83 40 yard dash. That is moving for a big guy like that. Williams will make an instant impact in the league as he will be able to take over a game in an instant. I compare Williams athleticism and aggressive nature to Nadomican Suh, one of the best defensive lineman in history.

With the second pick in the draft I have the San Francisco 49ers taking Nick Bosa. The 49ers desperately need a pass rusher and Nick Bosa is the best in this class. The 6’4 262 pound defensive end is pure power and strength. Bosa will be  a game charger from day one and fix the immediate need of a edge rusher by for the 49ers.

With the third pick in the draft I have the Jets trading their pick to the Jacksonville Jaguars and the Jaguars selecting Heisman winning Quarterback Kyler Murray. With the struggles in the quarterback room the jaguars had this past season this is an immediate need for them. This year’s QB class is relatively weak but I believe it’s the best choice for the Jags to fix an immediate issue. I also believe Kyler Murray to be the best QB in this draft. The man has speed that will absolutely toast a defense, and a absolute rocket for an arm. He’s the best of both worlds.

With the 4th pick in the draft I have the Raiders selecting Running back out of Alabama Josh Jacobs. Jacobs is coming from a string of absolute studs out of Alabama. The 5’11 running back not only has big play speed but also is a freaking bowling ball at 216 pounds. He is willing to put his shoulder down and fight for extra yards as well as run routes out of the backfield and catch passes. Jacobs is also a nasty blocker. This blue collar mentality will make Jacobs the perfect for the raiders heavy run scheme.

With the 5th pick I have another trade, this between the Tampa Bay Buccaneers and the Miami Dolphins. I have the Dolphins moving up to pick Quarterback Dwayne Haskins out of Ohio State. Haskins is the best Pro-style quarterback in this draft and would fit the vertical downfield passing system in Miami. Let’s face is Miami needs a quarterback.

With the 6th pick I have the New York Giants selected Quarterback Drew Lock out of Mizzou. Lock has the biggest arm in the draft, and absolute cannon for an arm. The weapon the Giants have at receiver make it this gunslinger a perfect fit to take over the team for a struggling Eli Manning.

With the 7th pick in the draft I have the New York Jets selecting offensive tackle Jawaan Taylor out of Florida. This 6’5 350 pound beast in an absolute mauler in the run game and has the footwork and arm length to drop step and pass block against the some of the best pass rushers in the league. Although the Jets don’t have an immediate need on the line it could never hurt to protect their young franchise QB Sam Darnold.

With the 8th pick in the draft I have the Detroit Lions selection defensive lineman Rashan Gary. The Lions biggest need this off season is a pure edge prospect with the risk of Ziggy Ansah not returning to the team. Gary isn’t the typical end player as he has the size and strength to play on the inside as well. I compare Gary to Aaron Donald, just much larger at 6’5 and 282 pounds.

With the 9th pick in the draft i have the Buffalo bills taking Wide Receiver D.K. Metcalf out of Ole miss. The 6’4 230 pound receiver is a vertical threat in the pass game with his muscular frame making him hard to cover. Along with his 4.33 40 yard dash he’ll be able to burn the best corners in the league. A big wide out such as Metcalf is the perfect type for the bills and their young gunslinger Josh Allen to rifle the ball to.

With the 10th pick in the draft I have the Denver broncos selecting Linebacker Devin White out of LSU. The broncos have struggled in past year with covering opposing tight ends and adding a quick and big backer such as White. White is 6’4 and 240 pounds and has great sideline to sideline speed. His size and speed makes him a hard hitter who can also fill the hole fast. The broncos are likely to lose current backer Brandon Marshall so adding a threat like White is an ideal situation.

Expect many surprises in this year’s draft as many teams have big needs in the  off season. 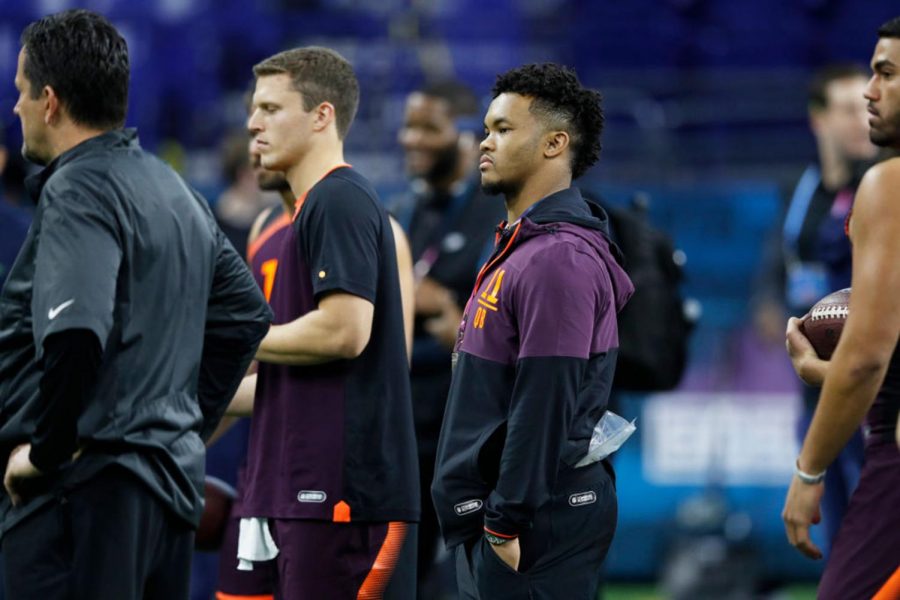