More Than Material and Music

Answers to why we stand in front of the American Flag during the Pledge of Allegiance and the National Anthem. 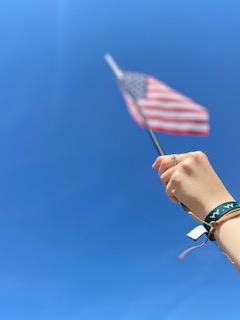 Sophomore, Gabby Burgess, holds an American flag proudly under a scenery of a blue sky.

I remember when I was young repeating over and over the Pledge of Allegiance with my mom because it was mandatory for all the kindergarteners to have it memorized. Ten years later, and schools around the nation are still reciting it. Now that I’m older and understand the basic meaning and reason behind the American flag, the National Anthem, and the Pledge, I understand why sometimes it can be frustrating for people to look around in their first period class on an early Monday morning to see their peers purposely disrespect what members of our past generation have worked extremely hard for. Is standing to put your right hand over your heart and listen silently to the speaker over the old intercom, the singer at the windy football game, and much more the least we can do as citizens of the United States of America? Or is it something completely meaningless to todays generation?

What does the American flag represent?

Created in June of 1775, the first “official” American flag was established. Two years went by when the Second Continental Congress realized that the American flag needed to look more different compared to the British one. On June 14th, 1777, congress decided on a flag with red and white stripes and 13 stars in a circle of a blue field,  inspired by the design of Elizabeth “Betsy” Ross. The American flag means a lot of things to different people. Some think that it shows a symbol of our freedom, history, and government, while others believe it’s just a piece of material.

“The U.S. flag stands for our nation and the shared history, pride, principles, and commitments of its people. When we properly display this powerful symbol, we signal our respect for everything it represents.” -USAGov

No matter what you may believe, there is hard evidence on what the colors, stars, and stripes truly represent. The flag’s alternating red and white stripes represent the 13 original colonies. The 50 white stars in the uppermost left blue rectangle represent the current 50 states and that make up America. USAGov says that even the colors have specific representations:

The American flag even has a section of code in the United States law books dedicated to the American flag, called the flag code. It was affective as June 14th, 1923,  by the National Flag Conference where U.S Navy and Army representatives were present. Title 4, chapter 1, section 9 states,

Though there are no official consequences for refusing and violating the codes, it does display disrespect to the American flag and the United States of America.

What does the Pledge of Allegiance represent?

Written by Francis Bellamy and created as early as 1892, the Pledge wasn’t officially certified by congress until 1942. Though laws have now been emplaced that specifically say students are not required to stand and recite it, it is encouraged, and specifically Kickapoo starts every Monday with it following by the National Anthem.

Most of the time, the Pledge is learned from straight memorization without understanding the true verses in context. Historyplex broke down the Pledge phrase by phrase to interpret it’s true meaning:

I pledge allegiance – I promise my loyalty

to the Flag of the United States of America – to the flag symbolizing the USA, and all of its 50 states

one nation – a united nation

under God – God willing/ having faith in God

indivisible – a country that cannot be divided

and justice – fair treatment from the law

for all – for each and every citizen of the country

Of course, there are exceptions where people do not stand before the flag for religious reasons. Jehovah’s Witnesses sees saluting and pledging loyalty to a flag unbiblical, the phrase “under God” has created backlash from atheists and polytheists. Personally, I absolutely respect their beliefs as long as they can show the same respect in return with silence during the standing of the Pledge. 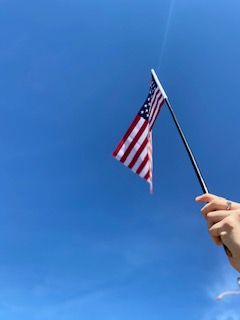 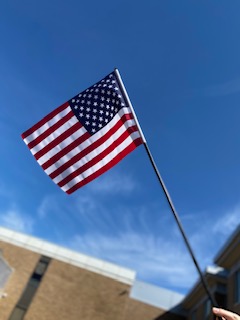 What does the National Anthem represent?

September 14th, 1814, Francis Scott Key wrote the National Anthem one early morning after watching the British invasion of Ford McHenry during the War of 1812. Over 100 years later, President Herbert Hoover officially made the Star Spangled Banner the National Anthem for the United States on March 3rd, 1931. Some think of the National Anthem as just another song, but it has much more meaning behind it.

One of the main reasons we stand for the National Anthem, (along with the Pledge) is to show respect for those who sacrificed their lives for others and to honor those who made it home after putting their life on the front line to protect current and future generations of America. Over 1.1 million Americans have died in U.S wars, and no matter what political view they might have, all military members are fighting for the same reason: to serve and protect their country. Another reason we stand for the National Anthem is to unite citizens as a whole. Everyone has their differences in opinions, beliefs, heritage, and so on and so forth, but at the end of the day we are all Americans who can proudly call America their home. Considering the United States is one of the most powerful, fortunate, and free countries in the world, everyone who takes residency among our lands can be classified as lucky compared to the underdeveloped countries in our world.

In conclusion, we stand during the Pledge and the National Anthem before the American flag because it represents a sign of respect. Purposely being disrespectful not only reflects on the type of person you are, but how you value our country, and how unthankful you are for what the brave and hard-working veterans fought for. The National Anthem and Pledge bring together people from different backgrounds and unites us as a whole, because notwithstanding our cultural, political, and religious variances, the fact that we are all Americans united is stronger and more powerful than any enemy that attempts to tear our nation apart. So next time you have to stand up and say the Pledge or listen to the Star Spangled Banner in front of the flying flag, remember the background, meaning, and people that make up the history of them. Now, you can proudly put your right hand over your heart with a smile on your face after understanding the purpose behind the American flag. After all, there is much more to it than material and music.

About the Contributor
Emilia Belcolore, News Editor
Tweets by @khqtoday
Your ad could go here! Call (417)523-8781 for more information. (Call from 8 a.m.-3 p.m Monday-Friday)
Go to our Facebook page to leave comments on stories and like to get new stories right in your news feed! Click the Facebook logo under the website header. https://www.facebook.com/khqonline
Polls