Rights Within the LGBTQ+ Community 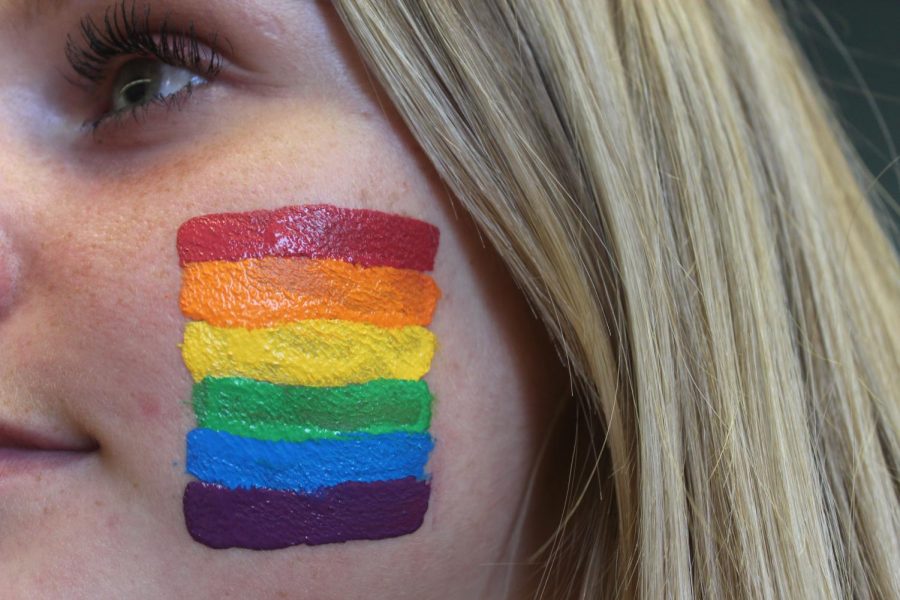 Junior Maggie Miller supporting the LGBTQ+ community by previewing the Pride flag on her cheek.

Kickapoo High School is rated number 204 in the state, with a 97 percent graduation rate, along with countless sports and academic awards. Most view it as the picture perfect school on the outside. On the inside, some apparent issues arise. One of the most prevalent is LGBTQ+ rights. This school year however, students decided to take a stance and let their voices be heard regarding their opinions in Kickapoo’s community. Students who are active members of the LGBTQ+ community deal with threats, bullying, mental health issues, and more. Even with all the toxicity surrounding the once taboo LGBTQ+ community, these students still fight their battle to let the people know that they want the same rights too.

On January 4th, 2021, attending students created an Instagram account called @changeforkickapoo. The account was first started to promote awareness of cultural appropriation within the school, but the account also shines light on other issues such as racism and rights among the LGBTQ+ community. At press time, the most recent post was on April 29th, 2021. It involved a bathroom sit-in protest organized by the students. The group feels that because Springfield Public Schools doesn’t allow students to use the restroom according to their gender identity, something needed to happen and potentially change. According to @changeforkickapoo’s post, there were supposed to be two protests. One held on April 29th, 2021 and the other just five days later on May 4th.

“This is to protest the discrimination of trans students at the school, in regards to the bathroom usage,” says the Change for Kickapoo Instagram post.

“We feel as if non-straight kids aren’t treated the same, specifically trans kids. Gender identity is valid, as are pronouns. We shouldn’t be forced to go into bathrooms divided by sex, but rather be able to go into the ones of our gender identity,” said an anonymous member of @changeforkickapoo.

For an unspecified reason, both of these protests were halted. Principal Bill Powers, is supportive of the movement and did not cancel these protests, despite what @changeforkickapoo’s Instagram story said the evening of the first scheduled protest.

“I sent them a direct message [Thursday night] through Instagram saying ‘hey we need to talk about this before it curves.’ So two of the students came in that morning. I met them in the conference room and basically just explained to them that we want to support them but we need to make sure that it’s done correctly so that we can supervise and insure that everyone is safe,” said Powers.

Powers said that the two group members were understanding and respectful during the meeting and didn’t seem to have a problem at the time. Powers did say that members of the transgender community who attend Kickapoo, do have options. If students who identify as transgender are not comfortable using the restroom that matches to their biological gender, then the bathrooms in the nurses office and library are available for them.

“We’re gonna support them and make sure that they’re safe,” said Powers.

Though the Change for Kickapoo student group is fighting for restroom usage based on gender identity, it’s not up to the school’s principal. These students are not only  fighting against the school administration but the supreme court.

“Right now the district’s policy procedure is that students must go to the restroom based on the gender of which they were born,” said Powers.

Strong and determined, the LGBTQ+ community is attempting to gain equal rights. But with the community being the minority, there are many negatives resulting from being different. One can say the biggest issue members face are mental health problems.

On average, one in five people will experience a mental health illness in their life, but if you identify as transgender, then it’s every one in two. 41 percent of people in the transgender community have attempted suicide at least once in their life. According to Phycology Today, that number is nine times as high as people who are cisgender, (when a persons gender identity matches the one at birth.)

“We don’t live in a very open-minded area, so being non-straight or trans, even both, can be hard,” said

According to the Yale School of Public Health,  people who are identify as transgender are six times more likely to have a mood or anxiety disorder, three times as likely to be prescribed antidepressants or antianxiety medications, and more than six times as likely to attempt suicide that results in hospitalization. There are ways that school communities can help the members of the LGBTQ+ community. According to the Centers for Disease Control and Prevention, research has shown that having a club dedicated to the LGBTQ+ community can help decrease violence, bullying, and feelings of suicide. Fortunately, Kickapoo does have a Gay-Straight Alliance (GSA) club. Art teacher, Mrs. Loudis is the sponsor for GSA. After school every Thursday is when Kickapoo’s GSA meets.

“GSA is a student-led club that provides a safe and inclusive environment for students to be with supportive and like-minded fellow students while we socialize, make art, examine anti-LGBTQ legislation, and Social Justice issues. Traditionally, GSA stands for Gay-Straight Alliance or Gender and Sexuality Alliance,” said Loudis.

Being a part of the LGBTQ+ community comes with its own set of challenges and problems that members are constantly attempting to overcome. With the help and support of others, the LGBTQ+ community is slowly but surely getting the rights that they have rightfully fought for over the span of many years.

About the Contributor
Emilia Belcolore, News Editor
Tweets by @khqtoday
Your ad could go here! Call (417)523-8781 for more information. (Call from 8 a.m.-3 p.m Monday-Friday)
Go to our Facebook page to leave comments on stories and like to get new stories right in your news feed! Click the Facebook logo under the website header. https://www.facebook.com/khqonline
Polls